To do: Mounting engine guard bars

When I first got my Alp, it came with a set of engine guard bars. They were not on the bike as the previous owner, one of my best mates, didn’t like them. I didn’t particularly like them either as they were white with a blue stripe to match the color scheme of the bike. Now, about eleven years later, I’m willing to give them a try, not for looks but for practicality as I intend to fix some extra lights.

As any Alper worth his or her bacon can tell you, the original Alp specifications stated the new bike was meant for daytime traffic only. With this in mind, Honda wasted no thoughts or money to include proper lighting. My first Alp in the early nineties had bad lights and this one is the same. An AfricaTwin I had a few years later was slightly better but only after modifying its electrics so both lights would be on together.

This may seem a simple and trivial activity, but it is not. Here I will spend most of my time.

The bars have four mounting brackets:

First, the bars will be dry fitted on the Alp. First dry fit: 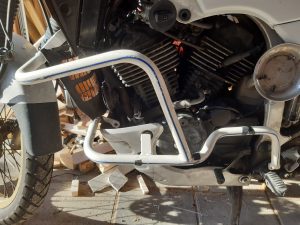 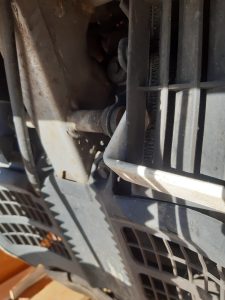 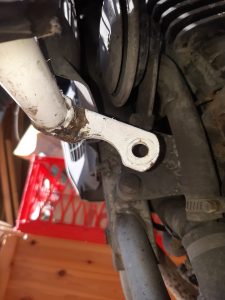 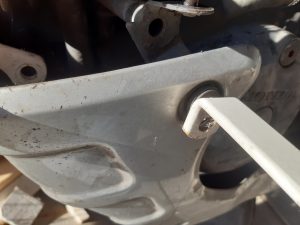 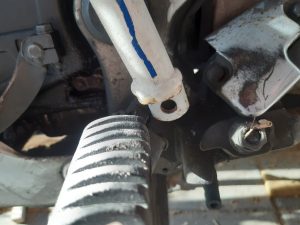 Next, I removed the bolts and installed the bar with just two bolts, the cooler bolt, and the footpeg bolt.

The dry fitting will reveal how much the brackets on the bars are off to the mounting points of the bike. In preparation for the dry fitting, remove the following:

Next, the guard bars can be dry fitted with bolts. I started on the left side and attached the bracket to the lower cooler bolt. Then I put in the upper footpeg bolt, both went in without problems. With these in place, I checked the other two mounting points, the one to the engine bracket and the one to the original lower plastic engine guard. Both were quite a bit off, at least 5mm.

What you always want to achieve is being able to mount the bars without putting tension on them. This implies that all brackets have to fit the frame mounting points as exactly as possible. If the bars are under tension when mounted, things will eventually break.

This type of bars were at the time produced in large quantities and all are quite similar. As they are not produced by Honda, you have to do some fiddling to get them to fit. Fiddling can be bending the bars, making them fit with fillers or shims, enlarging the mounting holes.

My choice was on the latter two options: 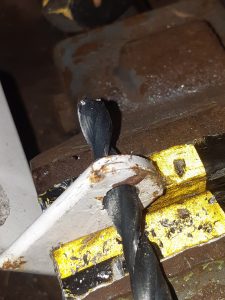 Once the bar was mounted with the two bolts as described above, there was a considerable gap to fill between the lower bracket and the lower plastic engine guard mount. The holes lined up but there was about 1cm of space to fill. This is no problem; a longer bolt and a filler will do the job just fine.

Last in line was from the bar to the front lower engine bracket. This gap is close to 8cm and clearly meant to be filled with a bracket or bolt that would be included in the original set of bars. Unfortunately, this bolt or bracket was not provided with the bike, so here some serious DIY will be required. 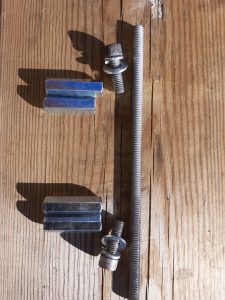 The two M8 insex bolts with rings and lockrings were leftovers from my old-bolt-and-nuts box, a most handy thing to have around indeed. I use mine to salvage bolts, nuts, rings, and the like for use in future projects.
When mounted, it might look like this: 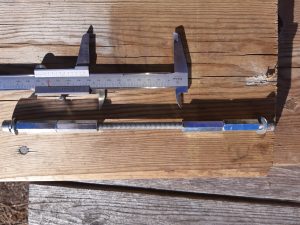 Clarifying: My contraption will replace the lower original engine mount bolt. When the whole thing is  finally installed it might look slightly like this: 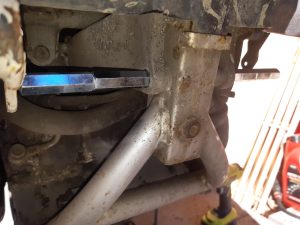 …I decided to keep this in place until the guard bars are ready as they are not in the way. Do not forget to lavishly apply grease to the threads to avoid them from rusting. Also, the right side bolt os quite close to the front exhaust header. I used copper grease as this is very sticky and resistant to heat.

A more serious problem turned out to be the left footpeg bracket bolts. These bolts are not regular metric bolts but have a metric-fine thread. As the bar will be mounted with the upper bolt behind the footpeg bracket, the lower bolt needs a shim to the same thickness as the bar bracket. Unfortunately, the upper bolt turned out to be too short and only turns a few times before they are stuck. Clearly, longer bolts need to be obtained.

On the left side, I did the same drilling and after this, the right sidebar fit perfectly.

Once in place, it was time to check if the lower side covers could still be installed and removed with the base in place. This is what it looked like at this point: 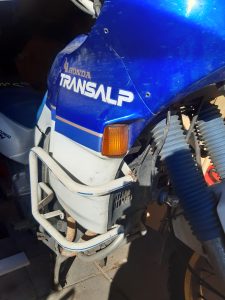 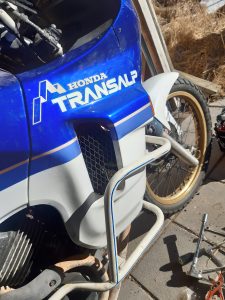 …it was a tight fit but they could still be fiddled in and out.

As stated above, the white paint is not something I fancy, so a change of color is needed. I will remove the striping and then the paint down to the bare metal. My bars had some rust on the welds, so this also needs to be addressed. The plan, for now, is to powder coat the bars and for that, all paint and rust must be removed. I used an angular grinder with a friendly disk in order to only remove paint, not metal. Paint removal is always a time-consuming activity and in my case, I spent the best part of an hour and a half to get one bar done. Here’s what I got: 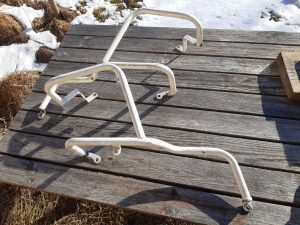 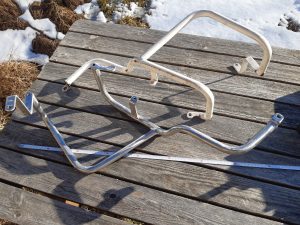 While grinding away, make sure to use goggles, earplugs, gloves, and whatever more you got in protection. The grinding process is loud, dusty and your clothes will be full of paint and metal particles by the time you’re halfway through.

Powdercoat or paint the bars:
…

Install the bars on the Alp:
…