To do: Side panel repair (right side)

What’s going on this time?

On the older Honda bikes, and perhaps even the newer ones, many plastic panels are held in place with either M6 bolts to the frame, screws and rubber nuts to other plastic parts, or by clicking a plastic knob into a rubber receiver on the frame. On my Alp, one of those plastic knobs was missing in action since I got it, and to my understanding even when my friend the previous owner got it. Time to do something about it!

Here’s the difference between the left and right side panels: 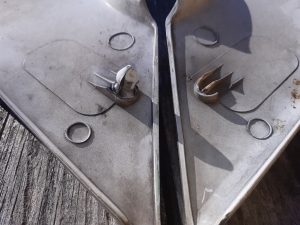 …clearly visible, or so I hope, is that the broken one is on the right.

Perhaps, back in the day, you could buy a set containing a new knob and rubber, and glue it in place where the old one used to be. Today, I’m not even gonna look for such a contraption but instead, attempt to make a new one myself.

I decided to use the good one as a model for the one MIA. To create a die, I wrapped the knob tightly with household plastic foil and wrapped thin rope around the narrowest stem. Here how it looked: 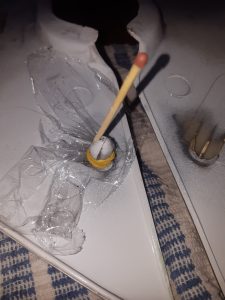 …note the match in the split in the knob. This turned out to be not adding anything to it so you might want to skip that.

Next step is to cover the whole thing in hot glue and let it set: 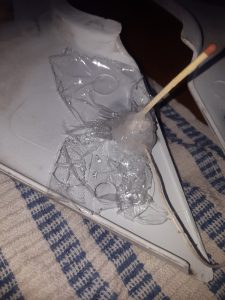 …don’t be shy with the glue, I was and had some leaks as a result of it.

Now the die has to be removed, I used a Stanley knife to do that, but any thin-bladed hobby knife will do the job just fine: 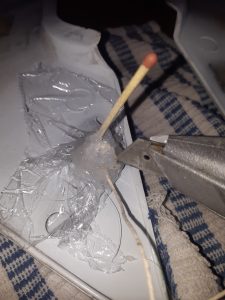 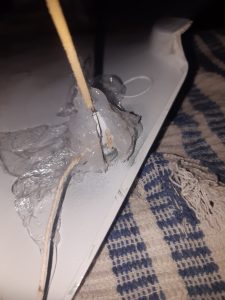 …you want to make a cut through the hot glue from the top to the bottom and all the way down to the original knob inside. On the left you see my first cut, on the right when I was done cutting.

When you’re done, the die can be opened slightly and the hot glue turned die can be removed. I use a pair of small grip pliers to keep the gap in the die closed: 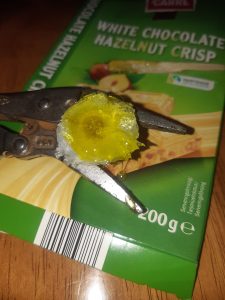 Make sure to overfill and create a larger ‘foot’ on the knob, this can be reduced later to match the side panel and to provide for a larger area for glueing. The epoxy does need its time to set, do not try and take it out of the die before it is completely set. I left mine for half a day before it was completely set.
And this is what it might look like: 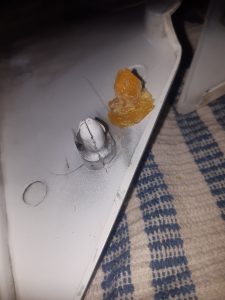 …not bad for my first try if I say so myself! Time to deploy small files and sandpaper to get the thing into its final shape!

After that, you got to prepare the surface of the panel where the new knob will be glued in place. I sandpapered the area to improve bonding and slightly modified the ‘rib’s left by the old knob to improve the position and strength of the new knob.

After glueing it in place: 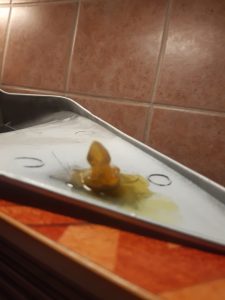 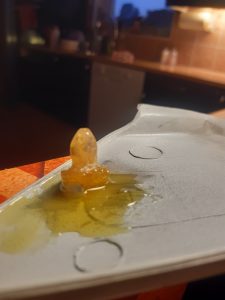 …note that I applied glue widely around the area. 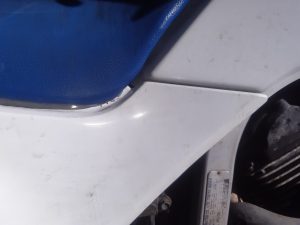 …which is quite the same as the original undamaged left side, so I declare the repair to be a success.

With the benefit of hindsight:

Perhaps next time, instead of molding one in a homemade die, I would simply make an epoxy rod, about 10mm diameter by 30mm length, that I would hold in a drill and shape with files and sandpaper. With the drill set to a suitable speed, you get a very nice symmetrical result. While the knob is asymmetrical, a symmetrical knob would not hurt. And you get the thing made in minutes instead of hours.